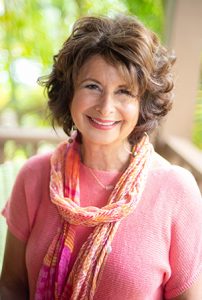 An abundance of aloha is one of the many gifts of life on Maui.
“What?” I can hear my husband Jamie ask, his voice raised uncharacteristically. “A thousand pounds?!” He is on the deck of our house talking on the phone while I, still struggling to waken, am cradling my first cup of coffee at the dining room table. The double doors separating me from the golden glow of a Maui morning are wide open, welcoming the warming sun… and my husband’s growing alarm.

He comes in and announces, “I’ve got to go. Kimokeo has a thousand pounds of liliko‘i for me. I need to pick up the whole load now.”

My husband uses liliko‘i (passion fruit) harvested from the jungle in Ke‘anae to make a liliko‘i elixir that he’ll freeze and later use for liliko‘i meringue pies (a family favorite), liliko‘i butter for friends and family, smoothies, cocktails, and even ice cubes. For those of you who have never collected liliko‘i—a task Jamie and I undertake every year during spring and summer months—let me tell you, a thousand pounds is a lot of fruit. Jamie’s old truck will moan under the weight.

A few hours later I am dressed to the nines, on my way to an appointment I can’t reschedule. Jamie is on the porch in full production mode. “Diane, come!” he calls out. “Taste this purple one!” He is eager to share each treasure. Most of the fruits are bright yellow, some are apple green or deeply golden, and a special few are the purple of a plum. He is taking them one by one from a huge bucket that contains but a fraction of the fruit he has unloaded in our garage. I shake my head. For one guy with a knife, a cutting board, and a blender, this is a long, lonely project.

Yet Jamie couldn’t be happier. Before I go, I pause to watch him work. He slices open the smooth egg-shaped orbs to reveal yolk-like centers dotted with black seeds. As the fruits fall open, he quickly grabs their halves, scooping their luscious content into a bowl. Once the bowl is full, he pours the treasure into a hand-held food mill that separates the juice from the seeds. The result is a deep orange elixir that smells intoxicating.

As I join Jamie to taste the fruits (a job I can never refuse), I think of the stories in this issue and how special it is to have locally sourced food. As Shannon Wianecki explains in her story “Precious Cargo,” over eighty percent of what we consume in Hawai‘i is brought here from elsewhere and 98 percent of that arrives by ship, including the magazine in your hand. Learn with Shannon what it takes to bring it all home.

Of course, it wasn’t always this way. Ancient Hawaiians survived on the resources offered by the land, the ocean, and the spirits that illuminated their path. Meet Kepā Maly, a man who credits the lessons of his kūpuna (elders) for his very life. His mission is to bring ancient values into the present for his beloved home of Lāna‘i, an island now focused on the principles of preservation, progress, and sustainability as a viable model for a healthy future.

If you’re after a little adventure—on the dark side—then a full-moon hike through the Waihe‘e Refuge is just your cup of kava. Join Judy Edwards and the Hawaiian Islands Land Trust on a guided hike through giant sand dunes and the ghostly realm between ao (light) and pō (darkness).

Back to taste testing. I pronounce the purple ones my favorites and head for the driveway. There I see Kimokeo pulling in and another truck behind him. Seven smiling faces tumble out. “We’re here to help Jamie,” Kimokeo announces. “We’ll stay until it’s done.” Just like that I am reminded once again why I love living on Maui. We may be 2,200 miles from the nearest continent but on an island you are never far from friends.