Whoever coined the phrase “When in Rome, do as the Romans do” was on to something.

Tourists often get a bad rap — sometimes through no fault of their own — for driving too slowly, setting up on the beach too close to others, and using selfie sticks in all the wrong places. To err is human, but if you heed a few strategic Maui travel tips, you can gracefully sidestep some common blunders.

But first, you’ll need to pack. 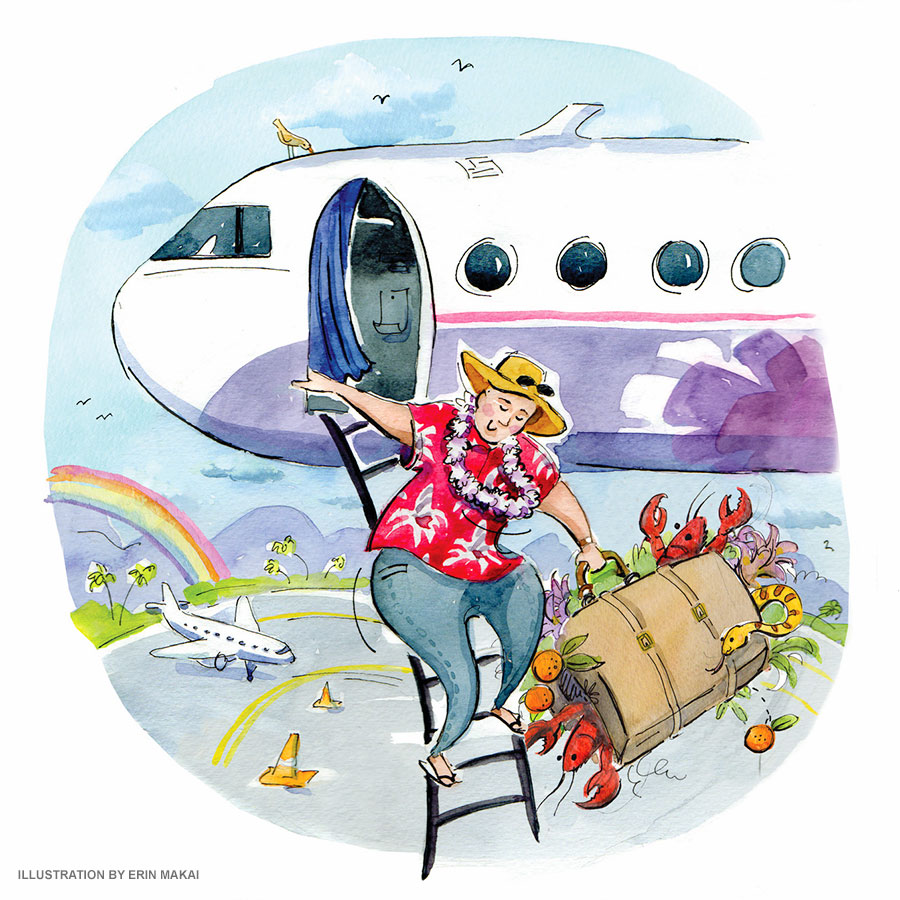 Do dress the part.

Leave the haute couture at home, says Sam Wilhelm, head concierge at the Four Seasons Resort Maui. “The dress code here is relaxed,” he says. However, if you show up at a fine-dining restaurant in board shorts and tank top, expect to be sent back to your room to change. Save the bathing suit for a poolside venue — especially if it’s wet.

Expect temperatures in the eighties year-round, but if you’re planning to head up the mountain, pack a few warm items. The higher you go, the chillier it gets.

Do leave the lobster at home.

Kent Dumlao, an inspector with the state’s Department of Agriculture, advises visitors to check with his department (Hdoa.Hawaii.gov) before packing anything other than clothing and toiletries. “The most common things confiscated are live, nondomesticated animals like lobsters and oysters, Florida citrus, orchids and bromeliads, and corn,” he says.

If you must bring your pet lobster — or any of the other aforementioned flora or fauna — you’ll need to apply for an import permit several weeks in advance. Other items will undergo a thorough inspection once you arrive. “Most fruits, vegetables and plants can come into Hawai‘i provided they are inspected,” Dumlao says.

And if you’re traveling with a licensed service dog, Honolulu International Airport is your only port of entry, unless the DOA has issued you a neighbor-island inspection permit ahead of time.

Over the years, the department has seized some unusual contraband from airline passengers, including snakes and scorpions. “These animals are okay to have as pets in the continental U.S., but they are illegal here because they are a threat to our environment, agriculture and public safety,” Dumlao explains. It’s a serious threat. The Hawaiian archipelago — the Earth’s most isolated land mass — is home to native plants and animals that have few defenses against those from other ecosystems. As a result, the state has earned the dubious distinction of being the endangered species capital of the world.

Before you land on Maui, you’ll be asked to fill out an Agricultural Declaration Form. It takes only a minute or two, and failure to complete the form can result in penalties or possible jail time. “We ask that the form be filled out honestly,” Dumlao says. Show declared items to plant-quarantine inspectors in the baggage-claim area, where you’ll also find amnesty bins for undeclared items.

Wilhelm recommends following your hotel or resort on social media to get the scoop on special events and promotions, so you can arrange activities in advance. “The return on investment of landing and instantly enjoying the island — versus spending precious vacation time at the concierge desk — is well worth it,” he says. 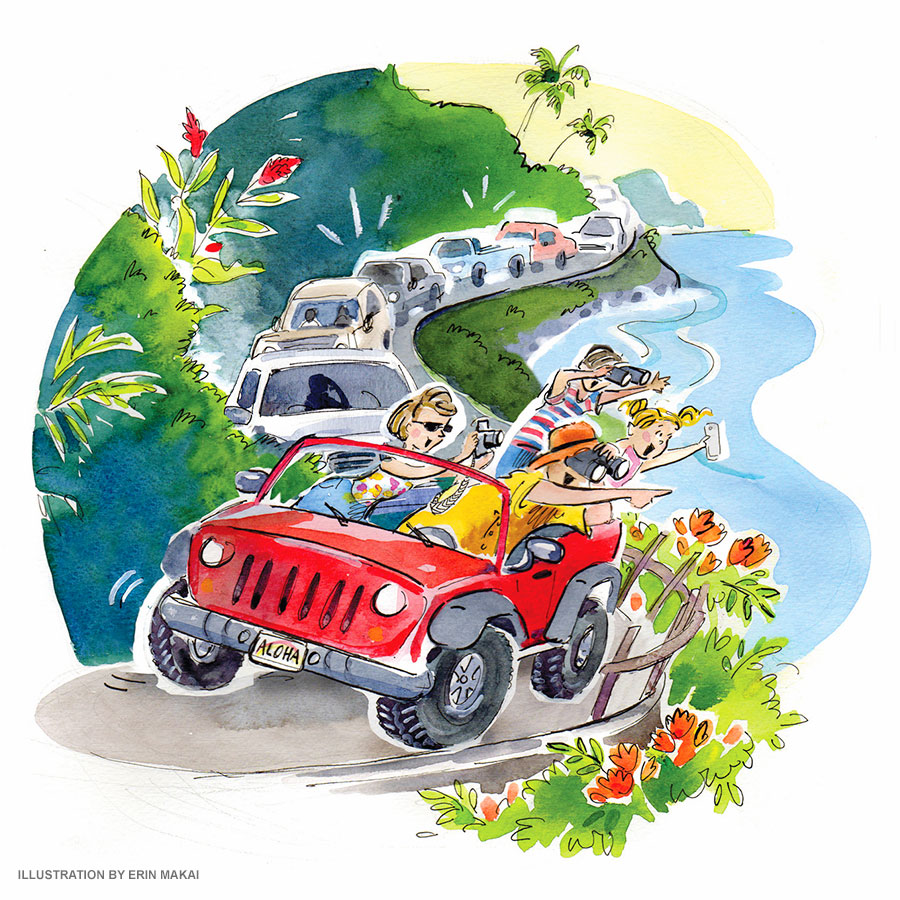 Do set your watch to “island time.”

Give yourself plenty of time to reach your destination, and keep in mind that mileage isn’t the best way to calculate how long it will take you to travel. Maui roads zigzag along sea cliffs, sidle up mountain slopes, and in some places forgo pavement altogether. On highways, 55 is the maximum legal speed — and running late to catch a flight does not exempt you from being stopped for speeding.

Do keep your eyes on the road.

If you drive, stay alert behind the wheel; it’s easy to become distracted by the island’s popular roadside attractions: rainbows, sunsets and breaching whales. Expect to share the road with scooters, bicycles, and pedestrians (who don’t always use crosswalks).

If you’re headed to a remote part of the island, be prepared to negotiate narrow roadways, steep mountain curves and one-lane bridges. If you come across a flooded roadway, turn around; vehicles can get stuck or even washed away by a flash flood. And don’t rely entirely on your phone’s GPS, as cell service is patchy in some areas. It’s a good idea to map out your route before you leave — or even better, let whoever’s in the passenger seat do the navigating.

Remember, people live and work on Maui, so if you’re lost, don’t hold up a line of cars behind you. Pull over and yield to local traffic. And if another driver kindly gives you the right of way, show your gratitude by waving or throwing a shaka (the “hang loose” gesture of thumb and pinky extended to form a Y). Also, don’t honk your horn to express your displeasure — it’s practically taboo here.

Do play it safe. 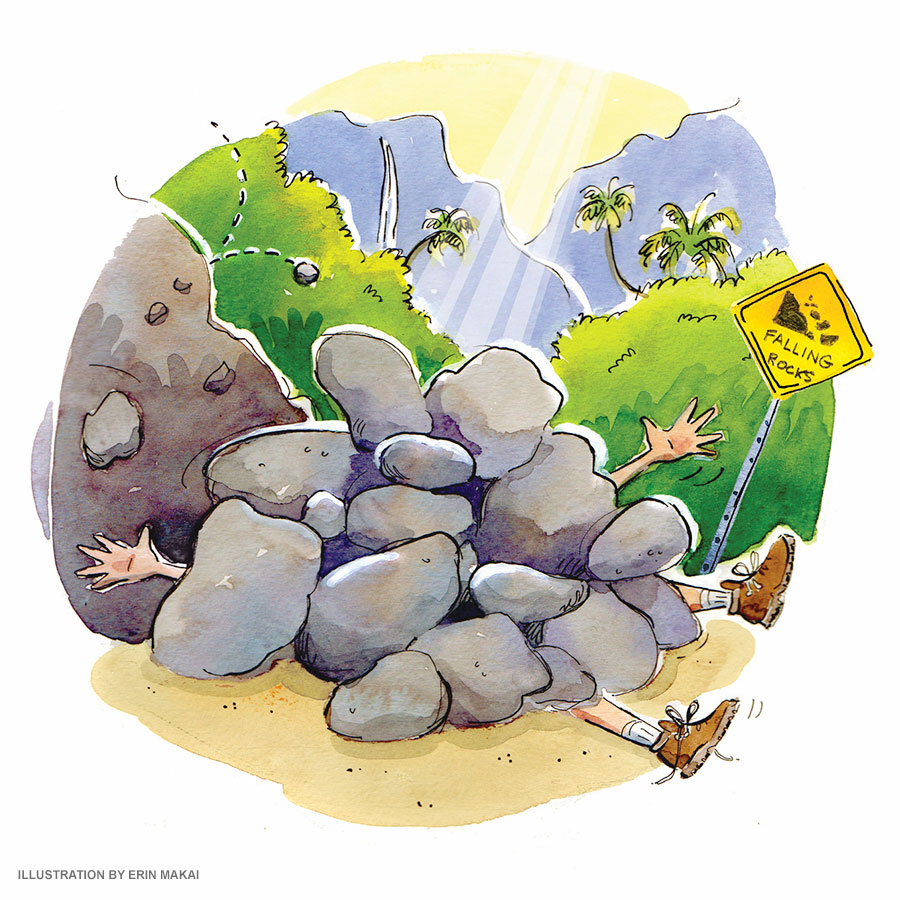 Maui is a natural beauty, but the island is prone to occasional mood swings: unpredictable ocean currents, sudden rockslides and dangerous flash floods.

While you’re waiting for your luggage at the airport, take a few minutes to watch the ocean-safety video in the baggage-claim area, says Maui Fire Chief Jeff Murray. Or view it before you arrive by logging on to Co.Maui.Hi.US/OceanSafety and scrolling to the bottom of the page, where you’ll also find other safety tips.

Chief Murray says his department frequently responds to mountain and ocean emergencies that could have easily been prevented. “Don’t be so mesmerized by the beauty of paradise that you forget to use common sense,” he cautions. “Know your personal limits and the limits of those you are responsible for.”

Do take a hike.

When it comes to hiking, common-sense precautions are a must, says Polly Angelakis, chief of interpretation and education for Haleakala National Park. Before you lace up your hiking boots, make sure you have a full tank of gas, plenty of water, snacks and a traveling companion — you should never hike alone. If you insist on going solo, let someone know where you’re going and when you expect to get back. Before you head out, check the weather forecast, and visit Nps.Gov or MauiSierraClub.Org for hiking conditions and guidelines.

Do put your head in the clouds.

Haleakala is a 10,023-foot dormant volcano; visiting its moonscape crater is like glimpsing another world. But up here, the air is thinner and can cause altitude sickness. Dress warmly when you visit the summit, as temperatures are generally 20 degrees colder than at sea level, and can dip below freezing. 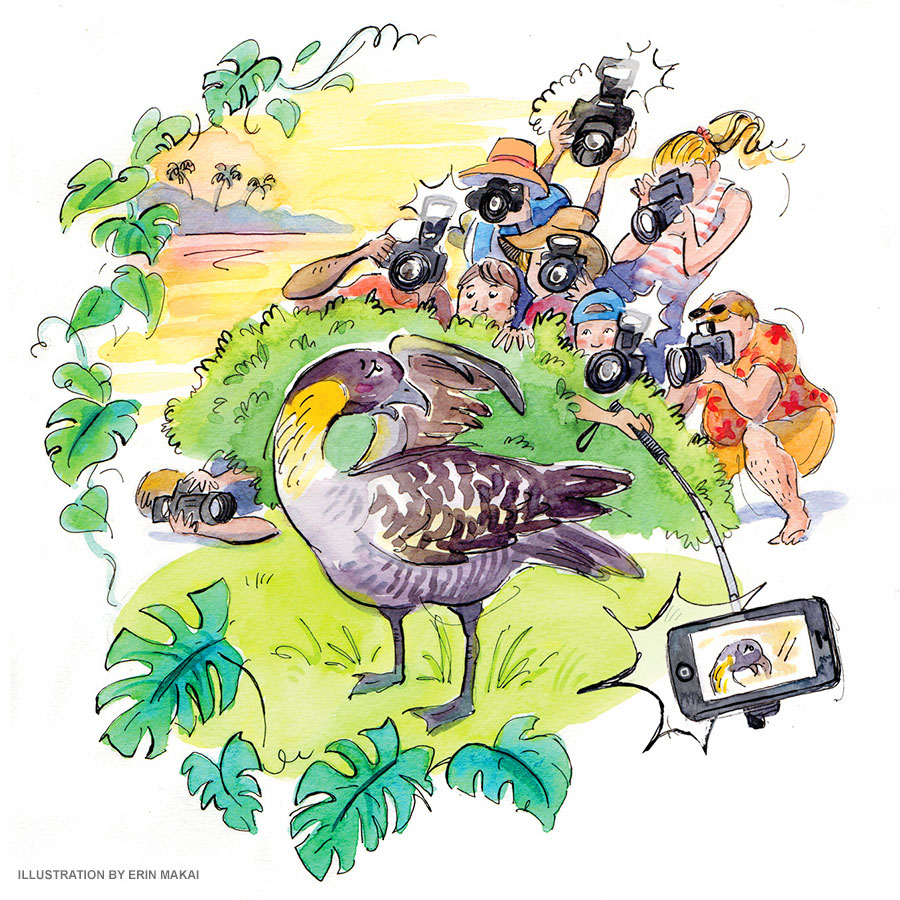 Don’t feed (or touch) the wildlife.

When you’re driving on the mountain, watch out for nene (Hawaiian geese) crossing the road, says Angelakis, especially in winter, when the goslings haven’t yet learned how to fly. She also reminds park visitors not to approach any wildlife or pick flowers or plants, especially the endangered Haleakala silversword.

“We ask that everyone respect our native plants, animals and the land,” Kent Dumlao adds. “Visitors venturing around the island should prevent the spread of ‘hitchhiking’ pests, such as weed seeds or insects.” Give these clingy pests the brush-off by cleaning your shoes thoroughly, he says, and report any sightings of invasive little fire ants, coqui frogs and coffee-borer beetles.

At the beach, if you happen upon a basking monk seal or sea turtle, move your blanket to another spot, says Hannah Bernard, president and cofounder of the Hawai‘i Wildlife Fund.

An up-close-and-personal encounter with a Hawaiian monk seal can be a costly mistake: you could wind up with a fine (or worse, jail time) for disturbing these endangered marine mammals. As for photo ops, take your best shot from a safe distance — several feet away — and don’t use a flash, Bernard says; the sudden burst of light frightens the animals.

Keep your distance from sea turtles, too — about fifteen feet on land, ten feet or more in the water. “They can become stressed and leave the area, which might make them more vulnerable to predation,” Bernard explains.

If you venture beneath the surface, be mindful of the coral reef; never trample, break or take pieces of it. “Everything is alive; the rocks have living algae and encrusting coral growing on them,” Bernard says. “Don’t forget: When you enter the ocean, you’re entering someone else’s home.” 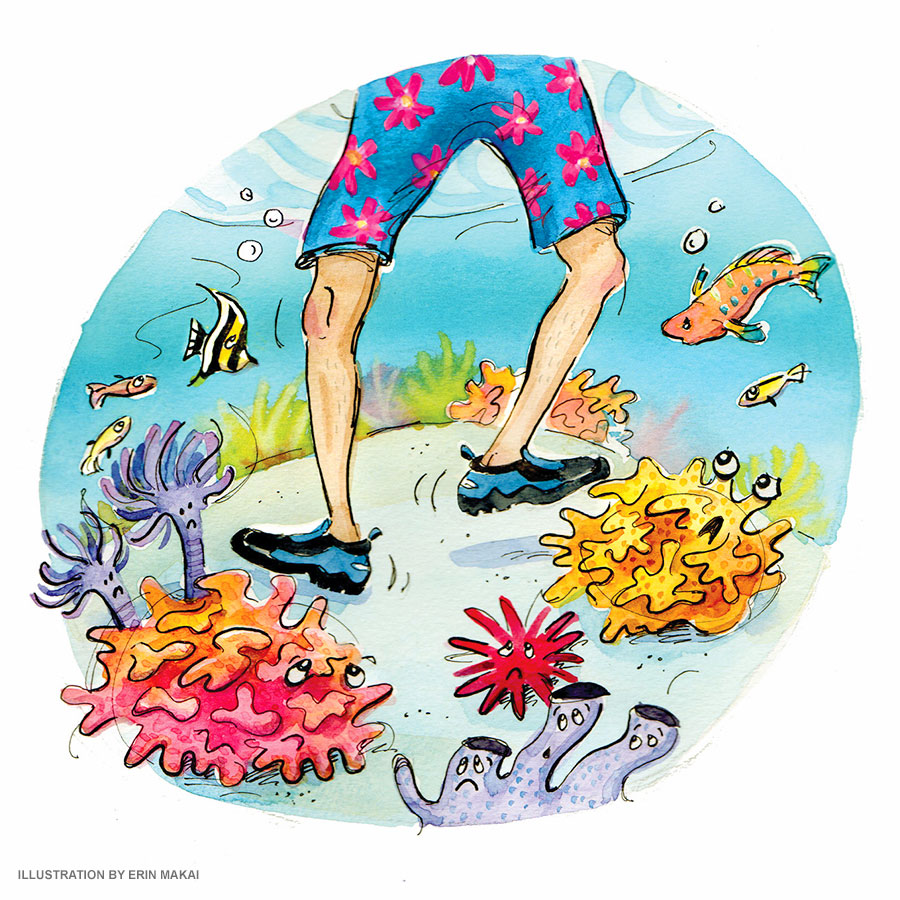 Don’t turn your back on the ocean.

“Shaka Doug” Corbin, who’s been a professional dive instructor for thirty-two years, urges underwater guests to take plenty of photos and leave only bubbles behind.

Corbin instructs his students to thoroughly assess offshore conditions before wading in — and look for red flags. “If locals aren’t in the water, then visitors shouldn’t be, either,” he says.

A sunburn is one souvenir you don’t want to bring home. Wilhelm advises tossing a tube of reef-safe sunscreen in your beach bag. Hawai‘i is just a short distance from the equator, so UV rays here can pack a punch. “There’s nothing worse than being uncomfortable the rest of your stay and having to dodge the sun,” he says. “Be generous with sunscreen, even if it’s cloudy and overcast.” When in doubt, slather more on, and even if your sunscreen is waterproof, reapply it after a swim.

He encourages visitors to absorb the culture — and to follow posted rules when exploring historic and cultural sites, even if the rules seem cumbersome or others are disobeying them. “‘No entrance’ means no entrance. Period,” he cautions. If you see the word kapu (taboo), do not enter, even if a guidebook or travel website says otherwise.

Most importantly: Look, but don’t touch. “Many sacred sites have stones, either as a main feature or as part of the natural environment,” Horcajo says. “Pohaku [rocks] have their own mana [divine power], and we don’t touch or stack them, especially in sacred areas.”

Do remove your shoes.

The immigrants who settled on Maui over the past two centuries helped to shape the island’s culture. That’s why you’ll find a bevy of multicultural events to enjoy throughout the year, from Portuguese festas to Japanese bon dances.

There is a pervasive Asian influence here, so if you’re invited into someone’s home, remove your shoes before you cross the threshold. (It’s okay to keep your socks on.) You’re likely to see a scattering of footwear at the entryway, so be sure to take the right pair when you leave.

Do indulge your taste buds.

Venture outside your culinary comfort zone while you’re here, says Wilhelm, who encourages Four Seasons guests to sample ‘ahi poke (pronounced poe-kay) — seasoned raw fish — during their stay. For an authentic Hawaiian taste, try laulau — meat wrapped in a taro leaf — or poi, a staple food made from the corm of the taro plant.

Many island dishes are served with chopsticks, though you can opt out and request a fork. Never place chopsticks vertically in a bowl of rice (it’s reminiscent of a Chinese funeral rite), and don’t rub wooden chopsticks together (an insult indicating you think they’re cheaply made).

When dining out, express your appreciation accordingly; tips are a significant part of a server’s income. A standard tip for good service is 15 percent of the bill (20 percent or more for excellent service). Doubling the sales tax may suffice in other states, but in Hawai‘i, sales tax is only 4 percent.

“Soak up and embrace Maui,” Wilhelm says. “If you allow yourself to truly experience it, you’ll be hooked and back for more.”