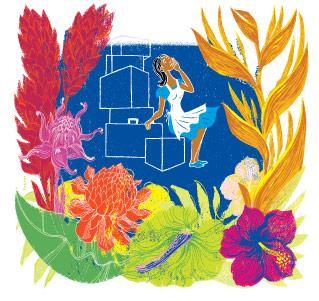 I’d done all I could to prepare for one of the most demanding tradeshows in the Western Hemisphere, the Philadelphia International Flower Show. It was March, the chill of winter still clinging to the city, and the organizers had adopted the optimistic theme of “Islands of Aloha.” As one of a handful of vendors representing Maui, I imagined cold, sun-starved Philadelphians emerging from their winter dens, drawn irresistibly to our tropical presence.

What I wasn’t expecting was the chaos that greeted our arrival at Philadelphia International Airport. News vans swarmed the terminal as police cordoned off the tarmac. Feeling as though I had fallen down the rabbit hole, I did what any self-respecting new-in-town arrival would do: snuck outside just as the cops locked the airport down. That’s how I found myself staring, dumbstruck, as a miscreant crashed through the gates, leading officers on a wild goose chase. As rumors of a terrorist attack circulated amid the news crews, I fearlessly . . . caught my train and headed into the the city.

Later I learned that the mayhem had been nothing more than the high jinks of an impressively drunken youth. The morning’s only casualty was the Philly cheesesteak, wrapped in wax paper, that I’d thrown recklessly into my purse.

By ten we were at the convention center, setting up the show. Boxes, flowers, leaves and wrapping paper lay strewn about, decor by Hurricane Flora. Next morning, the doors opened to a record throng.

The next four days were a blur of activity, as we shared our knowledge of the Islands and tropical blooms. We might forget to eat, or drink enough water to sustain us during long hours on the tradeshow floor, but we never stopped sharing aloha.

Then, after weeks of organizing, shipping, coordinating and performing, it was over. Time to load up the leftovers and head home. Once again, our space became a controlled chaos of boxes rising toward the ceiling above an ocean of debris. But this time, we were in a race to pack up and move out before the center’s iron gates locked at midnight. If I had felt like Alice in Wonderland all week, making my way through an improbable landscape and absurd occurrences, I was now Cinderella, scrambling to depart before my coach turned into a pumpkin.

I found a dolly and we hurriedly piled it high with boxes and tubes, then struggled it onto the service elevator, assured by a guard that it would take us to the shipping center where we could unburden ourselves of our precarious load. Doors closed. Elevator descended. Doors opened . . . smack dab in the middle of a busy commercial kitchen. Assuming a nonchalant air, we push-pulled our haul through the kitchen, into the restaurant, around tight corners of linen-covered tables with startled-looking patrons, and out to the hotel lobby.

A minute later we were on the street, breathlessly scanning in all directions for the shipping center. “That way!” someone yelled. With colleagues at starboard and port, I took the rear, wrestling our 800-pound gorilla in a race against the clock. Our destination in sight, we careened our load through a stoplight, and . . . everything came crashing down. A cash register hit the curb. A computer fell by the wayside. Lei and loose flowers descended in futile grace, like a Swan Lake ballerina who discovers she can’t really fly.

And then the most remarkable thing happened. Onlookers came running, grabbing boxes and carting them to the sidewalk. Strangers helped us clear the busy intersection, and kept helping, marching our parade of receipt pads and proteas, display items and orchid plants, to the shipping center.

Seeing movement inside, we pounded the glass in desperation until they let us in. A mere hour or so later, our boxes were ready to go. I took a last look and realized someone had pasted labels over the barcode for our one remaining box. There I stood, at 2 a.m., propping up the box as colleagues huddled around, picking at the stubborn, sticky label.

There comes a point when giggling is the better part of valor. A loud “Ha!” escaped me, echoed through the lobby, and soon we were all helplessly immersed in uncontrollable laughter.