It’s difficult to resist the urge to sink into one of the enticing chairs in Jim and Beverly’s spacious Ka‘anapali residence and “talk story.” After touring the home, that’s exactly what we do. The cheery whistle of the Sugar Cane Train, heard occasionally in the distance, adds a whimsical note to our surroundings.

The couple considered locations from Kapalua to Wailea before choosing this property in Ka‘anapali Golf Estates. “We’ve had a second home in a golf environment before,” Jim tells me, “and we really like it. Everyone is always upbeat.”

The vacant lot they purchased had its challenges, “but we liked the 180-degree view it offered,” Jim says. They also wanted a house tailored to their lifestyle, so although the property included building plans, Jim and Beverly sought the expertise of architect Marc Taron, president of Arquitectura in Waikapu.

Marc’s biggest hurdle was the configuration of the lot, which slopes nearly thirty feet. The easiest approach would be to step the house down the slope, but Jim and Beverly wanted the main floor all on one level. “They wanted the house to sit as high as possible to have a clear view of the ocean,” Marc says. “To get the house pad to its highest elevation we needed three tiers of six-foot retaining walls. We began with a 20,558-square-foot lot, and ended with 9,648 square feet of buildable area.”

All of the rocks in the retaining walls came from the property. “One of the downsides to grading [on Maui] is that you can run into a lot of blue rock,” Marc tells me. “But if you can keep it on site for your retaining walls, that’s a plus.” 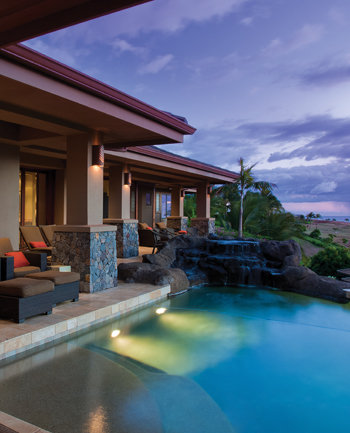 To the original design, Marc added generous covered lanais, and opened the interior spaces as much as possible, erasing any distinction between indoors and outdoors. The result is a striking two-level home with commanding ocean views, one that is both practical and comfortable for everyday living, yet inviting and stylish for entertaining. Others think the home is a winner, too. Last year it received the Building Industry Association–Hawai‘i’s Renaissance Grand Award in the New Residential Division for projects over $2 million. The judges’ statement notes: “The use of stucco, stone, wood, earth tones, and simple interior furnishings complements the open plan that captures the beauty of Maui.”

Interior designer Karen Rankin of Portland, Oregon, joined the project early on. “This is the sixth home I have designed for Jim and Beverly,” she says. “They like a style and personality that is appropriate to the location. In this home they wanted a contemporary look with Asian influence and an island-style ambiance. They also wanted all rooms and furnishings to be approachable and comfortable.”

They began with the great room. Karen explains that Jim wanted to be certain the animal-print chairs we’re sitting on were cozy. So rather than ordering custom-made, they purchased the chairs from a retail store where Jim could try them out first. The red ceramic jar on the coffee table came from Beverly’s collection of accessories; it became the inspiration for selecting the red, hand-woven wool rug.

Tumbled travertine flooring throughout the home and on the lanais creates a seamless transition between interior and exterior spaces. Its rough, textured finish lends a natural look and absorbs sound.

The travertine also directed the choice of interior paint colors, such as “mesa tan,” “java,” and “safari.” “The stone was a wonderful tool from which to build the color palette,” Karen says.

Generous use of sapele, an African hardwood selected for its attractive grain and durability, adds warmth and character to the home. Segmented glass railings with sapele trim follow the stairways and frame the outer edges of the lanais. Massive sliding glass doors, which disappear completely into the walls, are also trimmed with sapele.

The lanais have motorized solar shades that block the West Side’s relentless afternoon sun. “We had them installed just recently,” Beverly tells me. “Now we can be here any time and still enjoy the view.”

The kitchen has all the accoutrements a gourmet cook could ask for: double ovens, six-burner Wolf range, side-by-side Sub-Zero refrigerator/freezers, and a freestanding custom granite island with sink, dishwasher, breakfast bar . . . and a “working pantry” containing a second dishwasher and custom coffee system.

Adjacent to the kitchen is a laundry room featuring two sets of Kenmore front-loading washers and dryers. “I can wash dark and light clothing at the same time,” Beverly explains. She has had a double laundry system installed in every home she’s owned.

Most of the furniture was custom made by Design Furnishings International, in Portland, including the clever television console at the foot of the master bed that features a disappearing TV operated by remote control. “When a master bedroom such as this one opens out to a view, there’s no wall on which to mount a television,” says Marc.

Masterful use of texture, along with carefully selected furniture and accents, gives the residence its sophisticated ambiance. Karen and Beverly chose furnishings that add softness to the interior. Curved lines temper the architecture’s right angles.

“We gave consideration to each item, not just to its function and beauty, but also its placement relative to the view,” Karen explains. “Shape and color draw attention to an item, or lead the eye around it toward the view. Like the round dining table and chairs with arched tops—we needed function, but didn’t want the eye to stop at the table.” The contoured breakfast bar and the stairway leading from the upper to lower level offer other examples of this design concept.

“We also selected several Chinese antiques pieces for placement throughout the home, such as the chopping block in the media room and the great room’s coffee table, originally a dining table,” Karen continues. “The distinctive, often primitive, finishes on these pieces complement the refined finishes of the custom-designed furnishings.”

Grasscloth wallpaper in the bedrooms, offices and bathrooms adds another textural element.

Jim and Beverly have separate offices, each with sapele-inlay ceiling. The offices can be closed off with recessed sapele and glass shoji doors.

Karen developed the master bedroom’s décor around three celadon-and-gold contemporary floral toss pillows. She herself designed the paneled headboard and bolster to highlight the pillows, and selected everything else around those items. The house was built with a deep overhang to minimize the need for window coverings; the master bedroom’s painted wood shutters provide added privacy.

A media room on the home’s lower level is replete with wet bar, refrigerator, dishwasher, and Murphy bed. It’s the only room in the house without a view, Karen points out, “So we went outside our concept of keeping everything serene.” A bold, multicolored sectional divides into individual seating areas, and a gaily painted antique Mongolian credenza serves as an entertainment center.

A guest bedroom completes the lower level. It features an en-suite bathroom, guest washer and dryer, and its own lawn for lounging.

Since they’re just a short golf-cart ride away from the links, you’d imagine Jim and Beverly spend most days out on the course, improving their game. “We try to play a couple of times a week, but we never seem to get better at it,” Jim admits ruefully.

At home, they’re happy to have plenty of room to pursue their other interests. “We’ve been married for forty years,” laughs Beverly. “We each like our own space.”