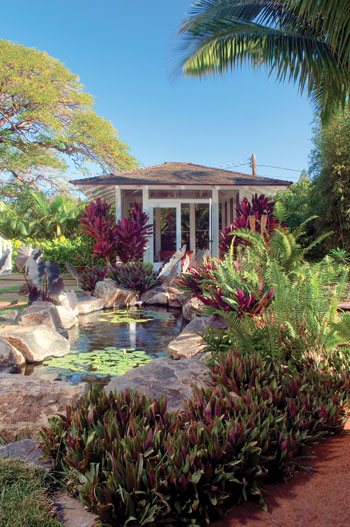 Built in 1927, the house had once been a charming bungalow in a fashionable neighborhood that was home to Lahaina’s elite: plantation managers, professional people, the renowned and musical Farden family. But by 2000, termite infestations, water damage, and decades of neglect had rendered it a prime candidate for demolition. Portions of the roof and floor had collapsed. The sprawling porch was no longer safe, and those exterior walls that weren’t actually bowing outward were at least out of plumb.

Nuts or not, Stiebinger expended countless hours of physical labor—and a small fortune—on restoring the home. Tom and Chris, who used to live in nearby Puamana, recall walking past the house every morning and seeing the transformation unfold. “Throughout the house, as he restored it, Jimmy made sure the foundation was strong,” says Tom. “He went wall by wall around the house. If a board or a window could be saved, he saved it. If not, he replaced it with something identical. He had the replacement windows custom made in Lahaina; the way you tell if it’s new or original is whether the glass is rippled or not.”

Tom fell in love with the house. “I took lots of pictures of it. I figured if the house couldn’t be saved, I’d have a record to possibly build something like it someday.”

He also approached the Hawai‘i Historic Foundation, hoping to have the Kaluakini home included on the state’s Register of Historic Places. “I wanted Jimmy to get the honor for restoring the house,” he says. “I didn’t know I’d own it.”

In 2004, with most of the restoration complete, Stiebinger decided to retire to Tahiti. “Jimmy came to me and said, ‘You and Chris are buying the house, even if I have to lend you the money to do it.’ He knew we would save it.”

Buy it they did. The couple added a traditional rock wall, landscaping that includes a backyard gazebo and koi pond, and a garage built in the same style and with the same craftsmanship as the original dwelling. 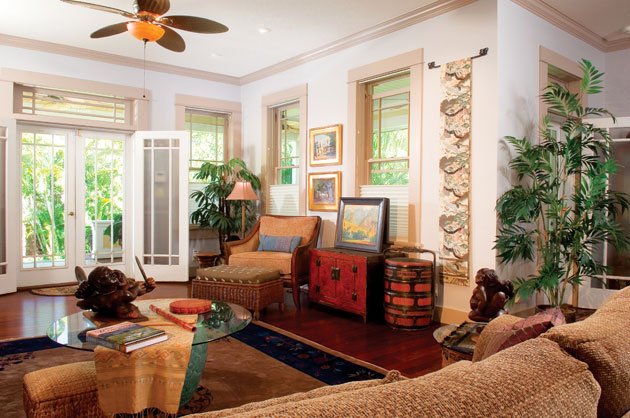 In 2006, the home received the Historic Hawai‘i Foundation’s Historic Preservation Honor Award, recognizing James Stiebinger’s “careful restoration and revitalization of a historic residence.” This past April, the Lahaina Restoration Foundation designated the William K. Kaluakini house one of three “Lahaina Heritage Sites,” along with the Pioneer Mill Company Store (“an exemplary example of adaptive reuse of a historic building”), and the house the plantation’s head carpenter once called home.

The heritage award is a first for the nearly fifty-year-old Lahaina Restoration Foundation, and comes none too soon. Besides the Kaluakini house, fewer than ten kama‘aina residences built in Lahaina in the first half of the last century still exist—and the head carpenter’s house has been slated for demolition.

“We’ve been losing these historic structures for forty or fifty years,” says Moore. “These buildings contain our history—and there aren’t many of them left.” 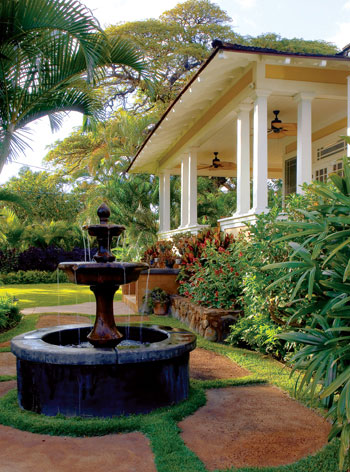 Solamillo has nominated the Kaluakini home for the National Register of Historic Places. The application (which Maui County handles without any cost to owners) includes more than sixteen single-spaced pages of Solamillo’s research on the home’s original construction, its renovation, the Kaluakini family, and their place in Maui’s history. His report notes that the home “retains at least 75 percent of its original building materials and craftsmanship,” though only the exterior, “public view” requires historic authenticity.

Indoors, the couple have restored the charm of a bygone era, while avoiding the unlived-in appearance of a museum. “First it had to be comfortable,” says Tom, “then look good.”

He credits wife Chris as interior decorator; she says her inspiration was the book Hawai‘i: A Sense of Place, by Mary Philpotts McGrath. 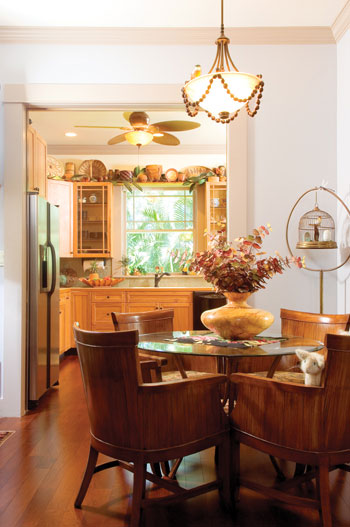 The furnishings are a blend of items gathered on the couples’ travels and from here on Maui: objects from Tonga, Burma, Butan, San Francisco . . . Home Depot, hotel sales, even the Salvation Army. Several pieces are from the 1920s, including an oriental rug owned by Tom’s grandfather, Seth Humphreys Heft, and picture frames and a scroll-worked wall clock Heft made himself.

Originally the home had four bedrooms—three at the rear of the house, one facing Front Street—which managed over the years to accommodate William and Abigail Kaluakini, their eleven children and myriad grandchildren. The couple had the middle bedroom transformed into a generous bathroom. One rear bedroom is now a guest room, the other Tom’s office. He says the Kaluakinis didn’t use the master bedroom at the front of the house. In those days, the journey over the pali from Maui’s Central Valley required an overnight stay, and William and Abigail wanted friends to know there was always a place for them.

A Family of Substance

William Kaluakini was a young man of twenty-six when he married Abigail Paukamakanikamanao‘oloko‘okalani Hose in 1898. That same year, the Hawaiian flag was lowered from the Lahaina Courthouse, marking the island kingdom’s annexation by the United States.

In his application to the National Register of Historic Places, Stanley Solamillo notes the Kaluakini family’s “keen interest in politics and great concern about the survival of the Hawaiian language and culture . . . in a world that was rapidly becoming more American.”

William was a member of the Royal Order of Kamehameha I, part of whose mission is “to preserve and perpetuate the ancient culture, customs and traditions of Hawai‘i.” Several of William and Abigail’s descendants have played important roles in the Hawaiian Renaissance, among them late, renowned kumu hula John Lake, who considered grandmother Abigail one of the most important influences in his life. His parents, Kealoha and John M. Lake, founded the Hawaiian Canoe Club. 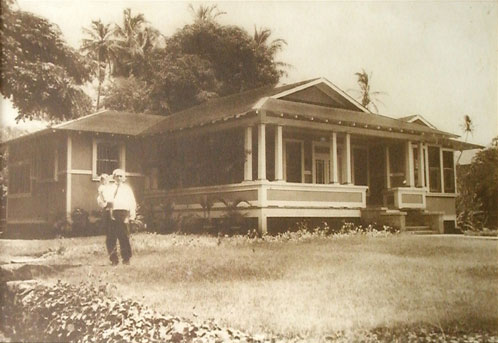 And then there’s the royal connection.

As a youth, William attended the Royal School in Honolulu, where he would have been a contemporary of Prince Jonah Kuhio Kalaniana‘ole. Years later, Kealoha Kaluakini Lake recalled her father helping the prince in his campaign to serve as a Territorial delegate to Washington, D.C. “Papa and the prince were very close friends.”

In 1905, William joined the police force, eventually serving as deputy sheriff in Lahaina and Hana. He died in 1932 at the age of sixty. After Abigail’s death in 1952, the house on Front Street was rented to the Sablas family, whose daughter Lori became a founding member of the Friends of Moku‘ula. She recalls that when the 1961 Spencer Tracy/Frank Sinatra movie The Devil at 4 O’Clock was being shot in West Maui, the film crew purchased palms from the Kaluakini house to use on the set.

In later years, a string of tenants occupied the Kaluakini home. “In the seventies or so, it became a rooming house,” says Tom.

“So many people have wandered up to the front door and said, ‘I used to live here,’” says Chris. “What amazes me is how vivid the memories are of the people who spent time in this house.”