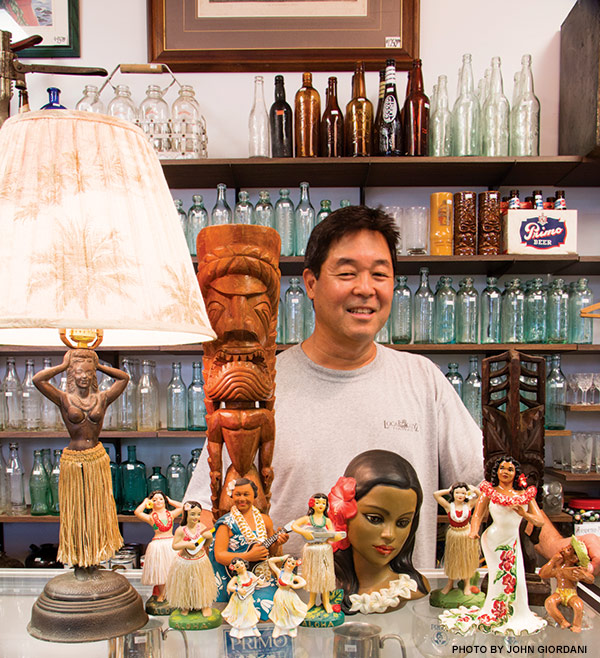 The draw of Hawaiiana is just as compelling for local islanders as it is for art historians and the habitues of tiki bars. Mike Kodama says that his fellow Mauians are as keen on his collectibles as the visitors are. “A lot of people come in and say, ‘Oh my goodness, I didn’t see this for thirty years! I used to drink out of this milk bottle from Waihe‘e Dairy.’”

Mike owns Miyako Sushi in the old millyard area of Wailuku. There you can get takeout trays of Spam musubi for Uncle’s retirement party, but the store is really a front for Mike’s stuff. He’s been collecting since the sixth grade (stamps, milk covers) and now he collects almost anything that strikes him as well made. He’s got high-end Batman action figures next to raw stone adze-heads that maybe go back to Kamehameha days. Aunty Nona would have called those adze-heads “Hawaiiana,” although the woman with the tiki-luau party in Omaha might be confused. But Mike’s okay in both worlds.

He says that good Hawaiiana is getting harder to find in Hawai‘i. He travels for it, and he’s gone from New Jersey to Japan. Local garage sales aren’t so productive, Mike has found. But the sushi business draws people in, and those people browse through his curios and sometimes say, “I’ve got one of these at home. Want it?” He says, “My daughter keeps saying I keep buying more than I’m selling. Actually, I enjoy it more for the hobby than for the business. It brings back memories.” Instead of putting a painting on his wall, he’d rather put up a showcase of artifacts. That way when people come over to the house they’ll say, “Wow. Never saw that for a long time.”

Hawaiiana sincerely touches the nostalgia of people who have spent their lives in the Islands and yet can’t call themselves native Hawaiian. That would be the majority of the state’s population, including Ginger Johnson. Ginger is half of the duo Hula Honeys (Robin Kneubel is her partner). Their music is unabashedly Hawaiiana, not Hawaiian — the tunes that came from Waikiki and Tin Pan Alley during the waves of Hawaiian music mania during the early 1900s.