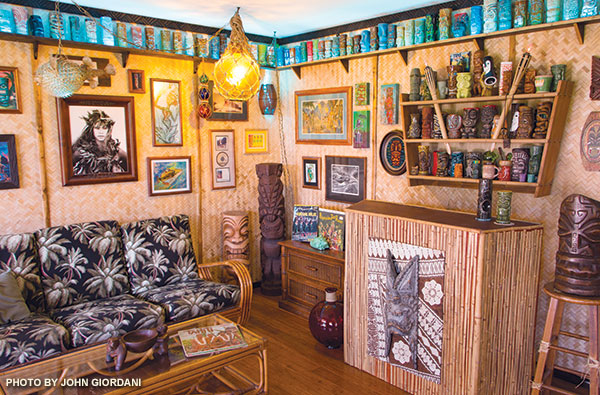 Authentic Hawaiian culture is one thing. There is also a conception of Hawai‘i that escaped the Islands long ago to lodge in people’s imaginations far across the world map. It has a rich life as a design style, as the inspiration for superb works in the modernist tradition of Art Deco, as zillions of pop-kitsch “collectibles,” even as fodder for a Halloween costume (plastic grass skirt, plastic plumeria lei). 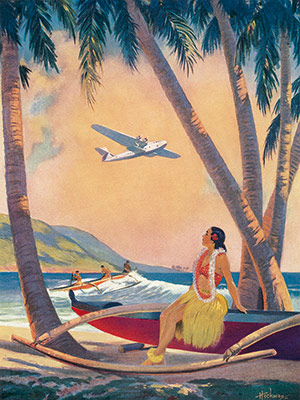 This conception, often labeled “Hawaiiana,” is a cartoon version of the actual culture. All too often the “hula-hula girl” in the artwork (dressed only in grass skirt, flowers, and an ‘ukulele, which she strums by moonlight beside the sea) looks more like a runaway debutant from Philadelphia. But the yearning expressed in this mythology is deeply genuine — the human desire to be less civilized.

Funny thing. Nona Beamer coined the term “Hawaiiana” in 1949 — so she said at age eighty-four in a 2007 public-television interview. “It was at a workshop with department of education teachers.” She wrote this on the board: Hawai‘i-ana. “I turned around. I looked at the teachers. I said, ‘I’d like for us to study this word.’”

The child of a family steeped in native traditions, Ms. Beamer had been expelled twice from Kamehameha School for speaking the Hawaiian language and for performing hula. Later, she introduced the concept of Hawaiian culture classes in the schools and taught them at her alma mater. By writing the word with diacritical marks included, she was standing for authenticity. “I didn’t mean ‘ana’ like Americana, Mexicana, like a conglomeration of things, you know.” Instead she was employing the Hawaiian word ana, which means to evaluate or to determine what is best. “I meant . . . that we’re going to teach and offer the children only the very best of Hawaiian culture in the classroom.”

But there was no way Aunty Nona could have kept her term from becoming as hokey and universally soothing as “Americana.” It escaped into pop culture to encompass the craftiness of Midwest moms who have never even seen the Pacific Ocean but still know how to throw a “luau party” replete with tiki-god balloons and “flower leis.” Hawaiiana is a kind of collectible sought by antique hounds: dashboard bobbleheads, lava-looking ashtrays, monkeypod bowls shaped like pineapples, black-velvet paintings of nonnative flowers, none of these authentic to the culture. As the Hawaiian Renaissance heated up during the seventies and eighties, island residents learned to respect the real deal (the Kumulipo — Hawaiian creation chant — not “Tiny Bubbles”). But Beamer’s term now covers the spectrum from sacred to silly.