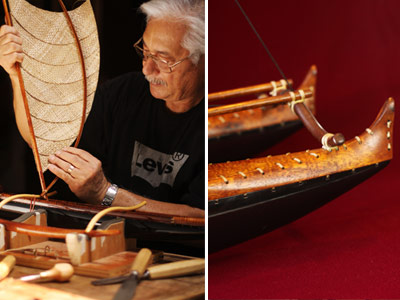 Keola Sequeira sits at the koa dining table in his Lahaina home, recalling a time the ocean almost claimed him.

“About ten years back,” he says, “there was about six canoes coming up from the South Pacific. The Hokulea . . . a canoe from New Zealand . . . all these voyaging canoes were coming. We were supposed to meet them outside of Molokai and sail with them to Honolulu. We got out there on the Moolele and the weather turned bad. The winds picked up. The swells were in excess of twenty feet. The bigger canoes turned into Kaunakakai to get out of the weather. But we were on the east side of Molokai. We couldn’t land. The waves would have crushed us against the pali. All we could do was sail through. Some people were up on the lookout above Kalaupapa. They saw the ocean was just white, with this little brown speck. That speck was us.

“We had to bail water, and were getting beaten by the waves. I’ve crossed the ‘Alenuihaha Channel, and this was worse. But we made it to Kaneohe, ten-and-a-half hours. The canoe took us through.”

Sequeira designed the forty-two-foot, double-hulled Moolele, built it with a couple of friends in the workshop behind his home, and sailed it for a quarter of a century. Sequeira is among the most knowledgeable canoe makers in the Islands—what Hawaiians of old would have called kahuna kalei waa, a master of the carved canoe.

Two decades ago, he retired from the Maui Police Department, where he served for twenty-five years. That was after a stint with the Air Force in Vietnam. He has been a woodworker even longer. The house, the table, the scale-model voyaging canoe that sits on the table between us . . . he designed and built them all. “From four or five years old, I was always making stuff,” he says.

When Bowman began advising the construction of the Hokulea, the voyaging canoe credited with launching the Hawaiian cultural renaissance of the 1970s, the former student joined his mentor. “He was working on the Hokulea with Herb Kane,” says Sequeira. “Herb asked me to carve the masts. We cut two koa trees from the Olinda forest above Makawao, and brought them to Lahaina. We made the masts in my shop.”

Sequeira’s interest in sailing canoes had begun in the late 1960s, while he was still in the Air Force. The complexity of crafting a vessel that would “take nature’s energy and work with it through the canoe” offered as much a mental as physical challenge—especially since, “at the time, there were no double-hulled sailing canoes in Hawaii. I had a book, Canoes of Oceania. It was a study of all the canoes in the Pacific triangle. I’d go through that and see how other cultures did it.” 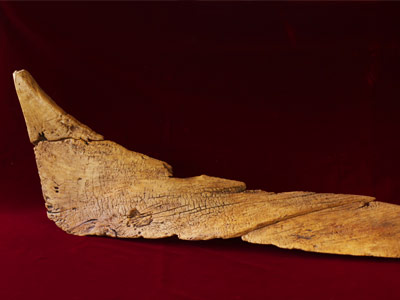 Sequeira had also seen a sailing canoe built by anthropologist Ben Finney, a founder and first president of the Polynesian Voyaging Society. A precursor to the Hokulea, Finney’s Nalehia was a replica of a Hawaiian double-hulled canoe, but Sequeira, studying it as a craftsman rather than an anthropologist, disagreed with some of Finney’s design.

“Finny was using two racing hulls,” says Sequeira. “Hawaiian racing hulls are rounded on the bottom.” The shape works, he says, when a canoe relies for its power on the strength of its paddlers, on strokes pulling down into the water. Sailing canoes take their power from the wind, catching it higher off the ocean’s surface. So, says Sequeira, “You have to redesign the hulls. Sailing canoes have more of a V shape, which digs into the water better. They don’t sideslip.”

Six months after work began on the Hokulea, Sequeira and the three friends who had helped him shape its masts decided to build their own canoe. “We all put in $20 each, drew up a brochure, and started raising money and building the canoe in my workshop. That canoe was the Moolele.”

Using an illustration from Canoes of Oceania as his guide, Sequeira adapted the depth and width of the hulls, and the distance between them, based on his own sailing experience. When it came to materials, tradition yielded to practicality. “We made the hulls out of fiberglass. Maintenance on wood is outrageous; the log has a tendency to crack. And you cut down a tree, make the canoe, about 85 percent of the log is wasted. Today we have better materials that are less harmful to the environment.”

The illustration gave Sequeira a starting point, but if he had a question, “I couldn’t go talk to people about how to do it.” So Sequeira would ask his question of the ancestors. “I would go to sleep at night and see it in a dream. I would wake up and know what to do. 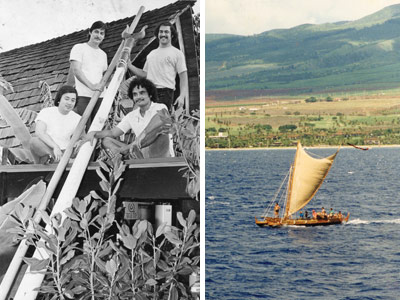 “If you look at different canoes, you can say, ‘That one’s Micronesian; that one’s Hawaiian. The shapes are different. The design for the Hawaiian canoe was refined over hundreds of years to contend with ocean currents and winds coming through between the islands.”

“The channels between the Hawaiian Islands are notoriously windy and rough,” agrees Tom Birchard, a senior forecaster with the National Oceanic & Atmospheric Administration in Honolulu. That’s because “the Hawaiian Islands are high islands”; the terrain creates pressure conditions that accelerate the flow of air between them. “Our typical trade winds blow at fifteen to twenty knots, but they accelerate to twenty-five knots or more in the channels. That wind leads to increased seas.”

“Most likely the first canoes that came here, probably from the Marquesas, had long manus, the fore and aft ends that stuck out far from the canoe,” says Sequeira. “The extension of the bow and stern couldn’t take the pounding of Hawaii’s channels. About 800 A.D., the kahuna kalai waa made the fore and aft ends short, and rounded the ‘iako, the booms connecting the double hulls, to raise the middle platform above the waves.

“A Hawaiian canoe is a functional piece of art,” says Sequeira. “Some areas of the South Pacific have form, but also a lot of embellishment. Hawaiian design, it’s all in the form. If you look at the Moolele, it has that beautiful feel, lots of curved lines. How to bring them all together and still be functional was the expertise of the kahuna kalai waa.”

During the 1980s, Sequeira received another gift from the past. Amfac, developer of Kaanapali Beach Resort, had plans to create a sea village that would give Hawaiian practitioners a place to train apprentices, and visitors a more authentic cultural experience. The village never materialized, but during the research, says Sequeira, “We found out that a rancher had found a canoe in a cave in Kanaio. The Bishop Museum came out and took pictures. When I got there, here is this canoe hull about twenty-one feet long. It was carved with adzes. The person who did it was very adept. I suspect the canoe was from before Contact, or soon after, because it had rectangular holes. Prior to Cook, Hawaiian canoes were lashed with sennit. No nails. No glue. This canoe, you could see all the parts had the holes to lash it together.

“The rancher let me bring back a piece of the manu. People thought it was firewood. I cleaned it, studied it. As a woodcarver, I could see what kind of tree it was, where it came from in the tree, why it was carved that way. An anthropologist or archeologist might not.”

“In terms of building authentic Hawaiian canoes, Keola stands far above anyone else,” says Kumu Kelii Taua, a teacher and cultural practitioner. Taua gave the Moolele its Hawaiian blessing, placing the vessel in prestigious company. Taua was one of several kahuna who performed protocol at the Hokulea’s launching.

Like other aspects of Hawaiian culture, canoes have metaphorical meanings—not least of them the comparison to islands themselves. When you are alone out in the ocean, on an island or in a canoe, your survival depends on your ability to sustain yourself, relying only on what and whom you have with you.

Sequeira points to the bow’s extension on the model that sits on the table. “Manu means ‘bird,’” he says. “When you are at sea, one way you navigate is to watch the birds.

“I named the canoe Moolele, flying lizard, because it has a sail. The kuamoo, that’s the keel. It’s the lizard’s backbone. We’re not talking geckos; the moo is more like a dragon.”

Kelii Taua says that Polynesian navigators were trained to lie on their backs on the bottom of the canoe, their spinal cords touching the vessel’s “backbone” as they studied the stars.

Keola Sequeira has a maker’s interpretation. “The canoe is laying on its back in the water, making itself vulnerable so it can carry you. When something is making that sacrifice for you, you have to malama, take care of it, to cross these channels successfully. How you treat yourself, the canoe, the other people sailing with you, all of that plays its part.

“I sailed Moolele between the islands twenty-five years with no mishap, nobody lost, sometimes in really bad situations. When I sail, I make a prayer in Hawaiian tradition to Kanaloa, the ocean spirit. I tell him who we are, where we’re going, and ask permission to cross. Every sail, I ask permission.”

Keola Sequeira continues to share his knowledge as a kahuna kalai waa. He is helping construct a forty-five-foot canoe at Olowalu, and creates meticulous models of Hawaiian sailing canoes that he sells through his email address, keolatadashi@gmail.com.