Evan Pascual, the center’s marketing and public relations coordinator; is wearing an “Immerse Yourself” shirt and the shining eyes of someone who loves his job. “It is so exciting to show people what’s really happening in our waters,” he says, as we peek in at the rapidly growing Hawaiian green sea turtles sent over from Sea Life Park on O‘ahu as chubby hatchlings. In 1978, green sea turtle numbers were so low that they were placed under the protection of the U.S. Endangered Species Act, and have not yet fully recovered. But these hatchlings will grow up here in safety, with an abundance of food, and at about two years of age will be transported out to sea aboard the center’s boat and released into the wild. Since 1998, the center has raised and released seventy-four Hawaiian green sea turtles. Of those the center is tracking, the releases were successful; the turtles are doing well in the wild. 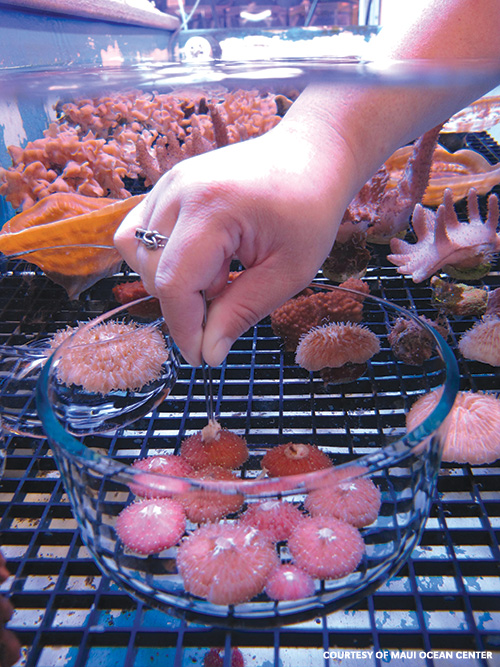 Pascual also tells me that the center works with Hawaiian cultural practitioners, like kahu [priest] Dane Maxwell, who bless the sharks and turtles when they arrive as exhibit animals, and later when they return to the sea. (In 2018, the center developed an audio guide for Hawaiian-language immersion schools—and anyone else curious to hear the tour in Hawaiian.)

There is a lot going on here, and at the end of my long, fun, and very informative day, I ask Pascual if there’s any story in particular he’d like to tell the world. He leans forward, saying, “This is kind of personal for me. Recently a mom called to tell us her daughter is graduating as a marine biologist. She wanted us to know that it all started with a visit here, when her daughter was a just a kid.”

For more information on the center’s many events, exhibits, presentations and programs, visit MauiOceanCenter.com.