Wow factor aside, the center’s deeper mission is stewardship, and education plays a big part. Given up-close-and-personal encounters with the creatures that live there, we land mammals just may grow more aware of, and committed to, protecting the ocean’s rich but fragile diversity. (That lithesome young tiger shark on display is on loan from the ocean. She’ll go back when she gets a little bigger.) 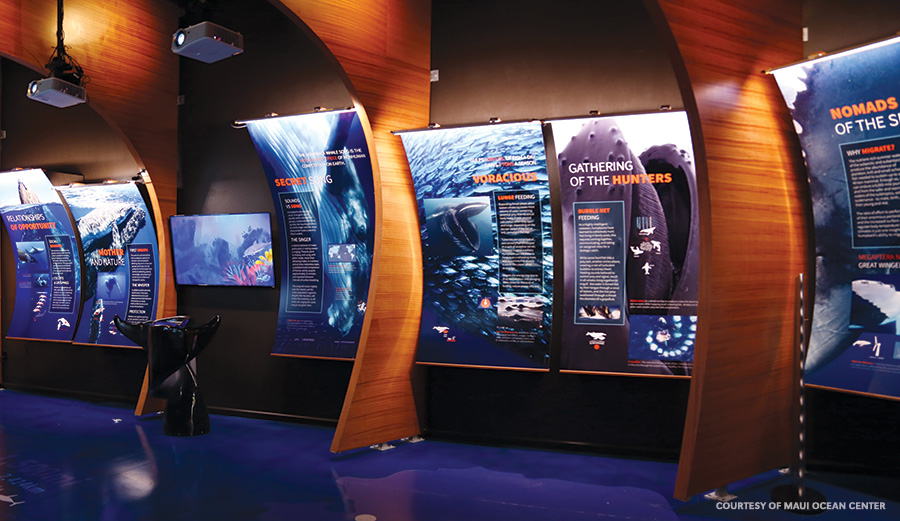 Behind the exhibits, in the Aquarium Lab, head curator John Gorman gazes proudly at a tank of very rare corals that are being “banked” against their loss in the wild. The Maui Ocean Center currently curates more than forty species of live Hawaiian corals—one of the largest collections in the world—and is collaborating with the state’s Division of Aquatic Resources, the Hawai‘i Institute for Marine Biology, the Waikiki Aquarium and others on “sort of an ark for rare corals,” a haven in case of a natural disaster, a hedge against the terrible effects of global climate change. Along with some of those partners, the center is also using the hot new scientific technique of fragmentation to regrow corals faster. “We began this aquarium by collecting coral,” Gorman notes. “Now we’ve moved on to propagating it.”

Coral reefs are literally the backbone of the near-shore ecosystem, providing shelter and sustenance to countless marine plants and animals—including yellow tangs, the iconic Hawaiian reef fish that unfortunately makes up roughly 70 percent of the wild Hawaiian fish collected for the commercial aquarium trade. Ensuring their survival is part of the Maui Ocean Center’s conservation program; they recently acquired the first-ever captive-bred yellow tangs. Gorman shows me a tank behind the exhibits where a fluttery school of nearly transparent, very young yellow tangs acts like confetti at a perpetual party, flitting this way and that. Supplied in mid-December 2018 by the Oceanic Institute on O‘ahu, they will gradually be released into the main exhibits and grow up there, deepening, over time, to that famous glowing yellow that makes them so attractive to commercial collectors.