Lahaina-born Chef Alvin Savella may be an island boy, but don’t assume he’s provincial. The Banyan Tree’s chef de cuisine holds a bachelor’s degree in culinary management from the Art Institute of California at Santa Monica. After graduation, he worked in the kitchens of Bon Appétit, Paramount Studios, and the Riviera Country Club. Next came ten years at Marina del Rey Ritz-Carlton in California under the mentorship of two Mediterranean chefs—one Turkish and one Italian—then elevation to lead cook. Iterations of classic dishes spun out of his kitchen as though prepared by a food magician. The “Kitchen Assassin,” as his 59,000 Instagram followers know him, is also a brand ambassador for True Cooks, a product line offering chefs’ kitchenware and clothing.

A little over a year ago, when Alvin wasn’t quite as well known (a “mere” 28,000 followers), he served as chef de cuisine at The Westin Kaanapali Ocean Resort’s Pūlehu, an Italian Grill. Working under Executive Chef Francois Milliet, Alvin set a high standard, developing the rich, flavor-infused dishes that became his trademark. His ability to create striking plate ups and to pixelate their images captivated his online fans: blood-red beet juice dripped and splashed across his “white canvas” plate, finished with festive foie gras; grilled cuts of dinosaur-size tomahawk steaks; lush and sweet Kaua‘i shrimp; and teacup-size seared diver sea scallops sous vide in butter.

When The Ritz-Carlton, Kapalua, offered Savella the post of chef de cuisine at its Banyan Tree restaurant in 2016, our Chef of the Year happily accepted. The intimate setting and the chance to create dishes with Kitchen Assassin originality proved a perfect fit. 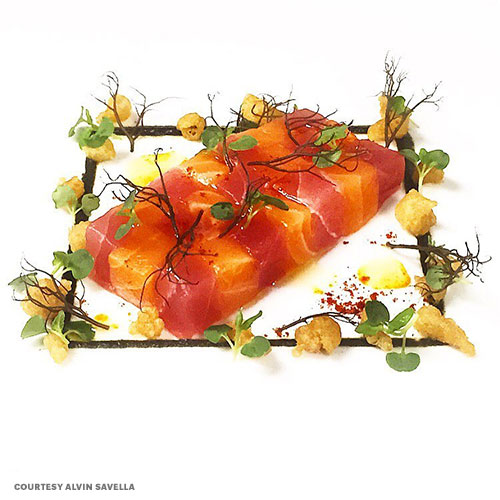 Fueled by passion, creativity, and an uncompromising work ethic, Savella exemplifies True Cooks’ mission statement: humility~ dedication~sacrifice. Chef Alvin teaches, mentors and collaborates with a tour-de-force kitchen staff—whom he’s lovingly named his “Kitchen Assassin Squad”—to turn out food that consistently delights The Banyan Tree guest. As Ritz-Carlton Executive Chef Kenny Sniffen notes, Alvin’s modest approach has earned him strong support from The Ritz-Carlton team. “Together, they are the foundation for the success at The Banyan Tree.”

“Alvin’s desire to continuously develop his craft is evident not only in his innovative approach to food, but in his growing ability to motivate and inspire the young chefs under his wing.”
—Chris Speere, site coordinator, UH–Maui College’s Food Innovation Center